Boston Day 2 started nice and early with some breakfast courtesy of Ben and Kim. Randy and I had spotted a PRIMARK the day before and knew we wanted to head there first. For those of you that don’t know, Primark is like H and M but in the UK. I didn’t even know they had one in the US! It was my favorite place to shop when I was in London and I was SO stoked to go again. Randy and I went and shopped like crazy people for a couple hours. We bought Christmas presents, birthday presents, the works. Randy and I are kinda crazy and shopping is one of our favorite things to do. Yes, judge away. It’s kind of a horrible hobby because we spend money, but other hobbies cost way more!

Anyway we shopped and shopped until we had a huge bag of things. We realized we didn’t want to haul around a bunch of clothes all day. So we sat down on some random steps, and proceeded to shove all the clothes in Randy’s new backpack. Hahaha it was crazy, but luckily not too heavy for Randy during the day. I just felt so silly that we hadn’t thought it through! *Travel Tip – buy souvenirs or clothes towards the end of the day if you can!

After our shopping we walked through downtown to get to the Old North Church. On the way we passed by Paul Revere’s home, which was super cool! It was awesome to see the place where such an amazing historical figure was born and raised. We then got to Little Italy and the Old North Church! The church is AMAZING, so full of history! There’s a huge statue to Paul Revere out front which we loved, and going into the church is wonderful. 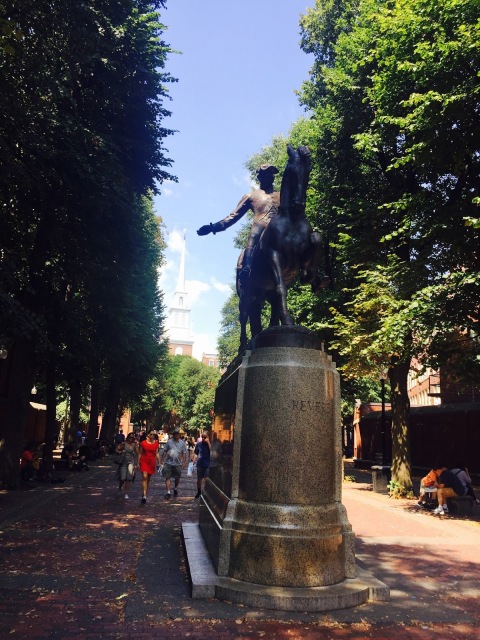 We were starving by this point, so we went to lunch at a little Italian place called Cantina. It was SO GOOD. I had mussels and pasta, and Randy had sausage and goat cheese penne. It was so authentic and the seafood is to DIE for! After lunch, we trekked on to the rest of the Freedom Trail! We went to another cemetery on a hill, which was so beautiful. It was a little hot so Randy and I quickly moved on. We crossed a bridge over the Charles river which was a little sketch! It was wobbly and we could see the water underneath the grates we were walking on. But the Charles river is beautiful and we saw birds catching fish, it was way cool. We then walked through a little park on the way to Bunker Hill. Let me say, it’s a little bit of a hike up to Bunker Hill! There aren’t any mountains or really hills in Boston, so this is one of the highest points. *Travel Tip – I brought a cross body bag that was neutral, so when I got exhausted from carrying it, Randy could just pop it on his shoulder for a little while. It was a lifesaver for weak little me!

We stopped in at the Visitor Center first and saw music, handkerchiefs, and other pieces from Boston in 1776. They also have a cool light up diorama thing explaining the places and events of that day. It was good to get a feel for what was happening in history instead of just seeing the monuments *Travel Tip – if history isn’t your thing, go to Boston! It will quickly become your thing, promise!

After the visitor center, we went to the Bunker Hill monument. They have people telling stories and giving you information about the people, and they had one shooting guns that they would have had at the time, which was sweet! 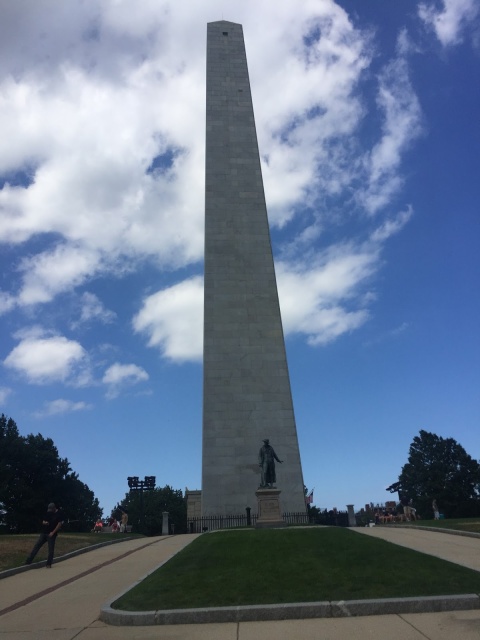 We then started our climb to the top. Bunker Hill has a winding staircase, and it’s really narrow and HOT. It’s 294 steps which doesn’t sound too hard, but I didn’t see one person who wasn’t huffing and puffing at least a little bit. It was a cool view at the top, but there were tiny windows, not much room, and too many people so we didn’t stay up there for long! Or get pictures, I’m afraid 😦 We then trekked back down, and our legs were a little wobbly for the rest of the day! We started walking down the hill to get back on the Freedom Trail. Right at the bottom of the hill, was an ice cream truck (genius location). Of course, we were hot and tired so we decided to get something. Well, Randy decided to get something, I said I would just have a bit. It was a $3.00 root beer float which really is highway robbery, but it was literally the best root beer float I had ever had in my life! No other root beer float will ever taste that good, because we were so tired and hot, it was like heaven.

We made it to the last stop on the Freedom Trail, the USS Constitution. It’s a ship that was used during the war of 1812 and is still able to be toured today! It was SO cool to get to see the ship, most of it still in original form. It was so cramped below deck, Randy had to stoop the whole time. Good thing he wasn’t a sailor! The crew’s quarters were so small, they taught us about what they would have had to eat and how they would have warded off scurvy, it honestly sounded miserable!

We then went into the museum and learned more about the ship, and ship life. Randy’s favorite part was the toy goat they had rigged up that you could pull in, like you would have done on a ship. We got to test our ability to be a sailor, see what our fates would have been (I died very quickly. Randy actually survived though!) and we had a blast. 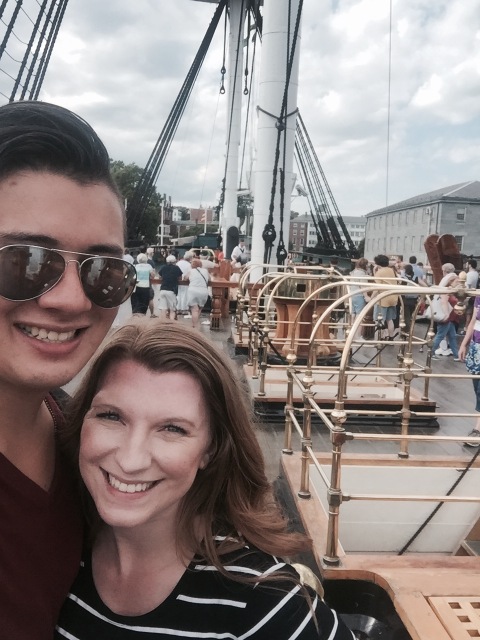 We decided rather than walk or take the T, we would take a water ferry back across the Charles river to the main part of Boston. It was sweet to be on the river, see all the party boats and sail boats, all of it was awesome! Next time we go to Boston I would want to try paddle boarding or something on the Charles!
When we got back to the Boston Harbor, we felt SO gross and hot and tired. So we ran into 7-11 and found some hand/body wipes! *Travel Tip – I would HIGHLY recommend finding some of these wipes and keeping them around! After being hot and tired, it was nice to just run in a bathroom and freshen up a little bit.
We then watched some street performers in a cool little park by the restaurant where we had dinner reservations.
*Travel Tip – my biggest Boston travel tip is Legal Seafood! I’ve had other seafood in Boston, and in all honesty all of it is really good because it’s so fresh! Legal is just a bit of a step above in my opinion! Randy got surf and turf, and the lobster was absolutely amazing. I got oysters which were heavenly, and some clam chowder. The first time I ever had clam chowder in my life was at a Legal Seafood in Boston, when I was about 7. I’ve been hooked ever since and it was SO good to have it again at Legal Seafood! If you don’t think you like lobster or oyster or things like that, just go to Boston and give it a try there! 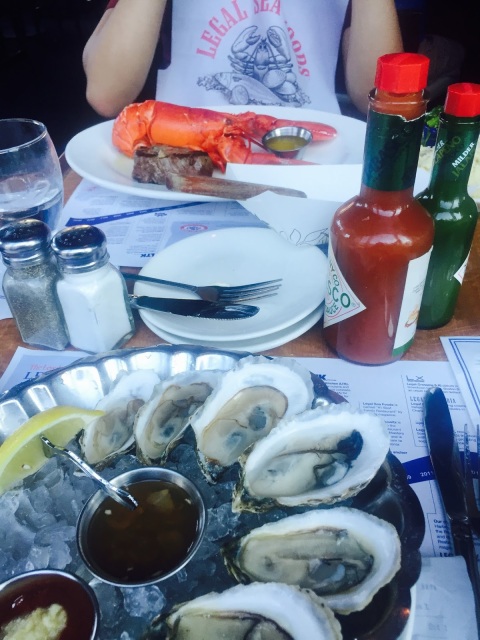 After this, we walked back to the downtown station, hopped on the T, and got back to Cambridge. Ben and Kim had made banana bread so we munched on that while talking and laughing with them. We were so lucky we got to stay with them and spend some time with them during our trip!
Vlog day 2 is also blurry and annoying I’m sorrrrrrry. We will get better.
XOXO stay tuned for day 3!